Country house festivities that celebrate both Christmas and history are taking place throughout England this year. Whether you choose to spend Christmas in the 16th century or early 19th century, there’s a venue that can provide the authentic feel of holidays past. 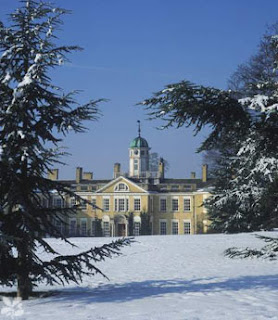 Polesden Lacey (above) in Surrey was once owned by Mrs. Ronald Greville DBE, who was the daughter of Scottish brewing magnate. The grounds boast a gorgeous, walled rose garden, while the house, once also owned by Richard Brinsley Sheridan, was the venue for the honeymoon of the future King George VI and Queen Elizabeth. Today, visitors can enjoy Mrs Greville’s collections, displayed in the reception rooms and galleries as they were at the time of her celebrated house parties. Cecil Beaton called Mrs. Greville “a galumphing, greedy, snobbish old toad,” though it was said that her servants were devoted to her.

During the holidays, servants, guides and volunteers at Polesden Lacey will don period costumes created by members of the National Association of Decorative and Fine Arts and the halls of the house will be decked in Edwardian splendour. For Christmas opening times, click here. ﻿

Located in the Lake District, 13th Century Muncaster Castle (above) has been owned by the same family for 800 years, with Peter Frost-Pennington it’s current owner. He also gets into the Christmas mood by dressing up as a Victorian butler and taking groups of visitors round the Castle. According to Frost-Pennington, his character is a “grasping old butler who gives them behind-the-scenes-gossip.” In addition to Victorian Christmas decor, the Castle offers a sound and light show each night, while the gardens come alive with music and special effects.
If you’d like to extend a Christmas visit to a country house to a stay at a country house, you might consider booking in to Chilston Park, where I’ve stayed in the past and highly recommend. Located in Kent, Chilston Park is a unique Grade I listed property that has been a home to eminent politicians, writers, Lords and Viscounts. 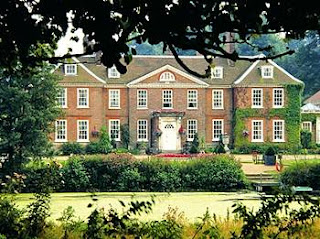 Carol singers and roaring fires will all be part of a Chilston Park Christmas, and mulled wine and mince pies will be served after Midnight Mass. Have breakfast served to you in bed whilst you open the presents delivered by Father Christmas through the previous night. In the afternoon, you can explore the acres of grounds and return in time to hear the Queen’s speech.

Foodies should head to the Manor House Hotel near Bath. The 14th Century manor house will be awash in twinkling white lights and  you’ll be welcomed to the hotel with Afternoon Tea. 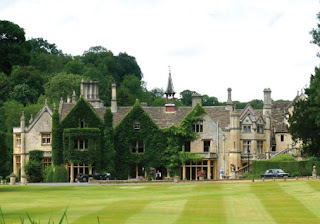 As part of the Barony of Combe, the Manor House was very much the heart of the breathtaking medieval village of Castle Combe. Today, the Hotel’s Michelin starred chef will prepare meals throughout your stay and on Christmas night you can join in the fun of a Quiz Night. Boxing Day options will include archery, walks through the 35 acre grounds or a trip to Bath to see the Pantomime.
Step it up a notch and mix fine food with spa treatments at Christmas at Stapleford Park. Early historical records indicate that at the time of the Norman Survey, Stapleford was held under the King by Henry de Ferrers, who fought at the battle of Hastings in 1066, and who was afterwards appointed the Doomsday Commissioner.

Today, guests can explore the 500 acres of grounds designed by Capability Brown, whilst inside, you’ll partake of a gourmet Christmas dinner. A champagne reception before lunch next day, candlelit buffet dinner later that night and a Boxing Day dinner dance are all perfect excuses to book into the spa for a little Christmaas pampering. After all, opening gifts can be tres exhausting.