Kristine here, back in the land of television shows in English and computer keyboards with all the keys where they should be. I did try to post while in France, but honestly, it was too frustrating. As Vicky has posted, once she is also back in the States we’ll be posting blogs and pics of our trip, but for now I’ll give you the highlights of the Wellington tour once Vicky and I parted ways. Vicky and Ed left us on Sunday morning, Battle of Waterloo day, in order to make their cruise connection. Brooke and I went on with the tour to the re-enactment site. 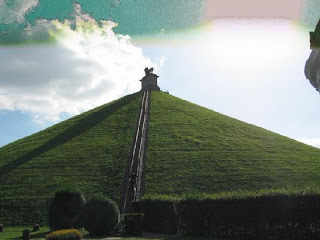 When we’d visited the day before to see the military camps, La Belle Alliance and Hougemount, someone had asked me if I were going to walk to the top of the Lion’s Mound, the great man-made hill erected to commemorate the Battle and I responded, emphatically, no. It’s an almost verticle hill with many, many steps to the top. Well, dear reader, never say never. It turns out that there were so many visitors to the battle that if you’d stayed on the ground, you’d never see a thing, being five or six deep in a crowd of spectators. It was absolutely freezing on the day, and had rained the day before so Brooke and I bought commemorative Waterloo blankets (not kidding) and began the long climb up the mound. We got about half way there and found ourselves spots from which to view the action. Once you left the stairs, you had to crouch down in order to walk to your place, the slope is so steep. Also, it’s covered in slippery grass, with no footholds to speak of. Talk about harrowing. Brooke later told me that she’d never before actually seen terror in anyone’s eyes as she had when she was helping me to our place. The fact that people above us kept losing their personal items – cameras, umbrellas and such – and that these kept rolling down the hill past us did not offer us much comfort. At last we found purchase, digging our heels and butts into the hillside in order to gain a bit of purchase, and settled in for the show. . .

And what a show it was. It was absolutely thrilling to be in the thick of the Battle, so to speak. The  formations, the cannons going off, the rifles being fired, the smoke enveloping the field as mounted calvary cantered across the field, all of it was fabulous. And to add to the authenticity of the thing, it began to bucket down rain. So now I’m precariously perched on the side of the Mound, watching the battle, holding an umbrella over us and trying to film the Battle. It was at this point that Brooke told me she wasn’t into Wellington as much as I was and this was all more of a sacrifice than she was prepared to make and that she was going down the pub to wait for me in the dry, with a drink. Thank God one of fellow tour members, an exceedingly nice man who was a retired police detective from Surrey, was with us and able to help me back down the Mound at the end or I’d still be sitting at the Battlefield.

Vicky and I took masses of photos all along the way and we promise to post them soon – shots of the military camps, the battle sites and lots of re-enactors in various uniforms. I also took much video – including footage of “Wellington” on horseback, galloping between regiments – and if I can figure out how to edit these, I’ll be posting them in the near future. It’s grand to be back and we look forward to sharing our trip via our posts here soon.