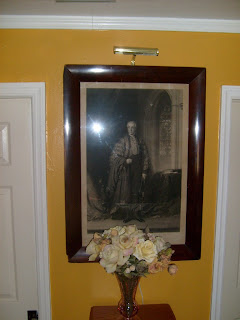 I’ve been living with the Duke of Wellington for nigh on thirty years now – reading about him, researching him and, perhaps most fun, collecting items associated with him. The first portrait of the Duke I ever bought is pictured at right. If you can believe it, I stumbled upon it in a thrift store in Florida and paid just $99 for it. Afterwards, I brought a photo of it with me to London and took it to Grosvenor Prints in Seven Dials and asked the gentleman there what he thought it was worth. He hemmed and hawed on giving me an appraisal without actually seeing the piece, but did tell me that mine was one of a series of eight engravings done shortly after the Duke’s death to commemorate the high points thereof. My engraving shows the Duke being installed as Chancellor of Oxford University and the frame is rosewood. When I told the man how much, or how little, I’d paid for the piece, he peered at me over the top of his glasses and said, “Madam, you got yourself a bargain.” 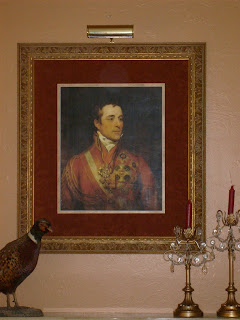 The next portrait I bought was this reproduction of Thomas Phillips’s 1814 painting of the Duke. Unfortunately, there isn’t an amusing story attached to this purchase, just ordered it through the mail, took it to be framed and matted and hung it above my fireplace. I must say, though, Artie looks tres festive when wreathed in garland at the holidays! My father bought the pheasant at an auction decades ago and when he returned home with it, both my mother and myself thought he was crazy. However, now I’m ever so glad he found it, as it’s so veddy Victorian in appearance and goes quite well on the mantle, non? 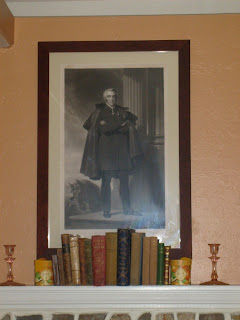 On a subsequent trip to London, I returned to Grosvenor Prints and spent quite a few hours perusing their Duke of Wellington stock, finally choosing this engraving because it seemed to match the first engraving in size and subject composition. It’s a contemporary engraving of Sir Thomas Lawrence’s 1821 portrait of the Duke, with Copenhagen’s head visible in the lower left corner. I had it matted and framed to match the first engraving. 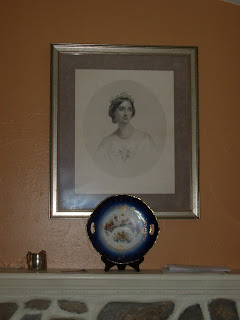 On that same visit, I also bought this engraving of Elizabeth Hay, 2nd Duchess of Wellington and favorite daughter-in-law of the Duke. I also have an engraving of the Duke showing Elizabeth over the field of Waterloo on horseback. My husband tries to make me understand that these pictures should all be hung together, museum-like in a large room or gallery and not ranged over every conceivable bit of wall space in a smallish family home in which current day people actually live. I told him that I agreed. The collection as a whole would look infinitely better in a townhouse in Bath’s Royal Crescent or a Grade II listed period home in, say, Gloucestershire. I further told him that as soon as he bought me one or the other I would move each and every picture and knick knack to our new house. No need to tell you that I’m still waiting for word that our Georgian manor home has been purchased. 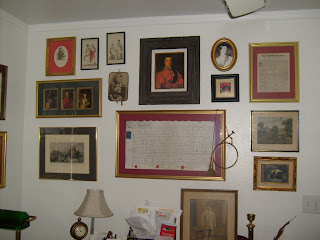 One wall in my office is taken up with various prints and here hangs Sir Thomas Lawrence’s most iconic image of the Duke, as well as the engraving on the field of Waterloo I mentioned earlier at bottom left. The framed document in the middle is a land indenture and the document at top right is an edition of the London Chronicle from 1771. Prince Leopold (or Leopold, King of the Belgians) is matted in red top left. Can I tell you how much enjoyment my passion for the past has afforded me over the years, giving me the excuse to visit bookshops, printsellers, antique shops and stalls and the like?  While I love each find, I think my favorite piece of Wellington memorabilia is one of his handwritten envelopes, seal still intact, that I found on Ebay! 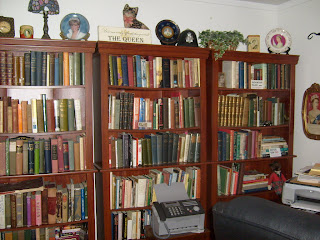 And, of course, all the book finds, whether associated with the Duke or not. Here are but a few. It always makes me chuckle when people ask me whether I’ve actually read them all. Obviously, these people are a breed apart from you and I. So, that’s a quick tour of my Wellington collection. When we go to London in June, Victoria and I plan to visit Grosvenor Prints and the bookstores in Charing Cross Road and Cecil Court. No doubt we’ll be coming home with more finds.

I can hear my husband groaning now.

4 thoughts on “Living With the Duke of Wellington”