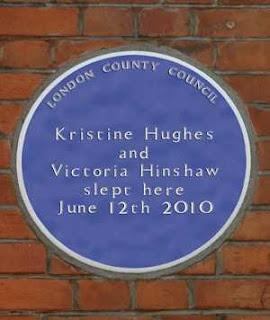 Thanks to a great website brought to our attention by Jo Manning, you can now make your very own Blue Plaque and immortalize yourself as part of London history. Well, okay, you can make one that appears as a photo and then you can print it, frame it and hang it on your own wall.

Here’s some history behind them:

The scheme for blue plaques, which make a stroll down any London street all the more interesting,  has been running for over 140 years and is one of the oldest of its kind in the world. The idea of erecting ‘memorial tablets’ in London was first proposed by William Ewart MP in the House of Commons in 1863. It had an immediate impact on the public imagination, and in 1866 the Society of Arts (later Royal Society of Arts) founded an official plaques scheme for the capital. The Society erected its first plaque – to the poet Lord Byron – in 1867. In all, the Society of Arts erected 35 plaques; today, less than half of them survive, the earliest of which commemorates Napoleon III (1867).

In 1901, the plaques scheme was taken over by London County Council (LCC), which erected nearly 250 plaques over the next 64 years and gave the scheme its popular appeal. It was under the LCC that the blue plaque design as we know it today was adopted, and the selection criteria were formalised.

On the abolition of the LCC in 1965, the plaques scheme passed to the Greater London Council (GLC). The scheme changed little, but the GLC was keen to broaden the range of people commemorated. The 262 plaques erected by the GLC include those to figures such as Sylvia Pankhurst, campaigner for women’s rights; Samuel Coleridge-Taylor, composer of the Song of Hiawatha; and Mary Seacole, the Jamaican nurse and heroine of the Crimean War.

English Heritage is now in charge of the scheme and has erected nearly 300 plaques in London, bringing the total number to over 800. Blue plaques are among the most familiar features of the capital’s streetscape. They adorn the façades of buildings in areas as different as Primrose Hill, Soho and Wimbledon; some of these buildings are grand, others look very ordinary, but all are connected by the fact that a remarkable person lived or worked there at some point in history.